How to Handle a Teenage Driver 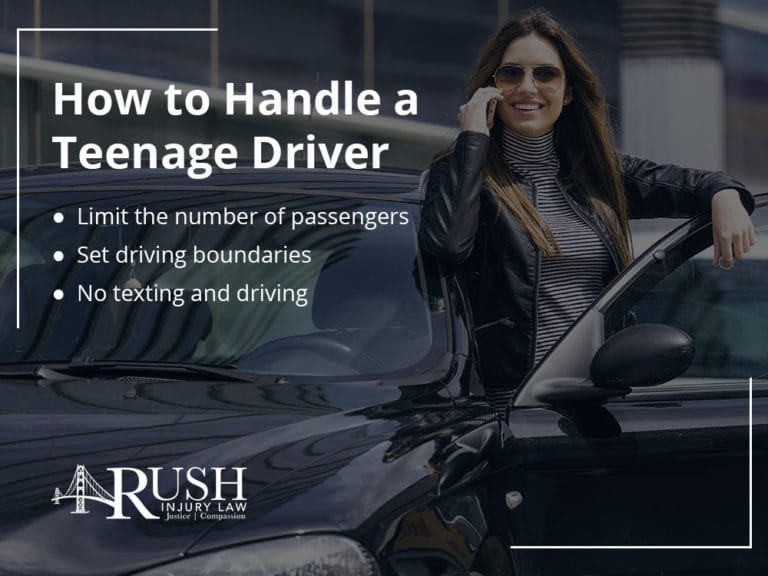 For a teenager, getting a driver’s license is one of the most exciting times of their lives. For a parent, it’s a white-knuckled, hair-raising experience fraught with perils real and imagined. Teenage drivers have high accident rates and car crashes are the leading cause of death for people aged 16-19. Your teenager views getting a driver’s license as a sign of responsibility and adulthood, but no one on the road is more dangerous than the 16-year old with their first license. Rush Injury Laws knows the concerns parents have about their kids getting into car accidents.

Make Firm, But Fair Rules For The Road

It’s important to set some rules for the road when your teenager gets behind the driver’s seat. The state of California has several restrictions on teen driving, such as no driving between 11 pm and 5 am and the banning of passengers under 20 years of age (unless accompanied by an adult). This is a good start, but parents would be wise to implement a few more.

Limit the number of passengers

The more people in the car, the more distractions for the driver. Friends want to tag along for the ride when a new driver gets on the road, but limit the number of friend pickups to 1 or 2.

The state of California doesn’t limit where teens can drive, but it’s not a bad idea to set a limit on how many miles away from home they can go. A novice drivers on a road they aren’t familiar with is a recipe for trouble. Only letting your teen driver go 20-30 miles away from the house is a good way to get peace of mind without restricting your child’s freedom.

No texting and driving

This rule might be difficult to enforce when your teen is on the road, but it’s a topic that needs to be discussed. According to the Center for Disease Control, you’re 23 times more likely to get in an accident while texting and driving. Talk openly about this policy and set a good example when your the driver and the teen is the passenger.

What Do If Your Teen Is In An Accident?

First of all, don’t panic. Teen crashes are common, but only 0.003% are fatal according to the United States Department of Transportation. A car is just a hunk of metal that can be replaced. But remember, the state of California made you put your John Hancock on your child’s license. This means their accident is your accident. Most accidents will be fully covered by insurance, but if your child as a history of reckless, you might be on the hook for the full damages.

Make sure the police are contacted. A police report is often the only thing preventing the case from becoming a ‘he-said-she-said’ argument. Take pictures of the damage on both cars for the insurance companies. An accident often puts great emotional stress on a teenager, so don’t immediately reprimand them. If your child was at fault, punishment can come later.

If your child was injured in a car accident in the San Francisco area, be sure to contact Rush Injury Law. Our lawyers are experts in car accidents involving teens and we’ll fight to get the compensation you deserve.