I Was Hit By A Car Riding My Bike. What Should I Do Next? 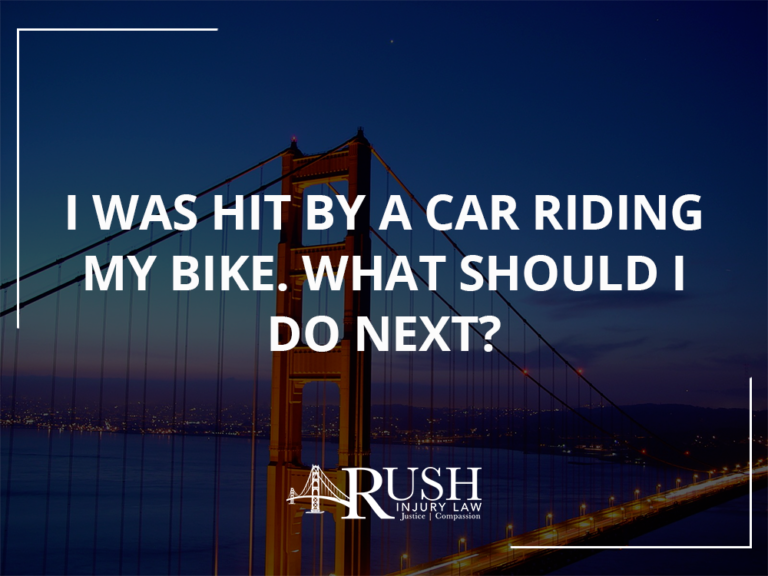 We don’t think of bike riding as a hazardous activity, but injuries to bikers are all too common, especially for those biking on city streets. If you rode a bike as a kid, you inevitably fell, skinned a knee, and fought back tears as your parents put Bactrim on it. But for adults commuting by bike in major cities, a skinned knee isn’t the only thing to worry about. Bicycle traffic fatalities are on the rise, and California really isn’t helping the issue. More bicycling fatalities happen in California than any other state in the union and San Francisco can be especially dangerous for bikers.

If you’re riding a bike in an urban area, you’re at risk of major injury (or worse). Most bicycles weigh under 50 lbs while the lightest car on the road is still hovering at close to 2000 lbs. So it doesn’t matter how or where an accident happens, a car and bike colliding is going to do more damage to the bike and rider than the car and driver. This means that following the rules of the road is critical. Bikers should always ride with the flow of traffic and never against it. Be mindful of stop lights and signs and always signal if you’re making a turn onto a different road. In California, bicyclists should ride on the right side of the road and have reflectors on their bike at night.

Hurt On A Bike

If you’ve been injured in a bicycle accident, you’ll be entitled to the same damages as a car accident victim provided the driver was proved to be at fault. This works the same way as accidents involving two cars – the comparative fault is used to determine who is responsible. If the car driver blew a stop sign, but the biker did not signal their turn, both parties might receive some degree of blame (ie. the driver might be assigned 80% of the blame and the cyclist 20%).

If you’ve been hurt in a biking accident, call the police right away. Act like you would in a car accident situation and take the necessary steps.

Take photos of the accident, including the condition of the bike, car, and injuries to either party.

Don’t move to the side of the road. Let the accident remain as is until the police arrive.

Get the name, license plate, and insurance company information from the driver.

Talk to any witness and ask them what they saw.

Bicycle injuries are unfortunately ever common in California, and you’ll want to have insurance, even if you just ride the bike 1 mile to work. California law only requires drivers to carry $15,000 in insurance coverage. Be prepared to cover yourself for a while, especially if the driver denies fault. If you’ve been injured in an accident like this, contact Rush Injury Lawtoday and get the compensation for injuries that you deserve.