Are Your Aches and Pains Related to a Recent Car Accident 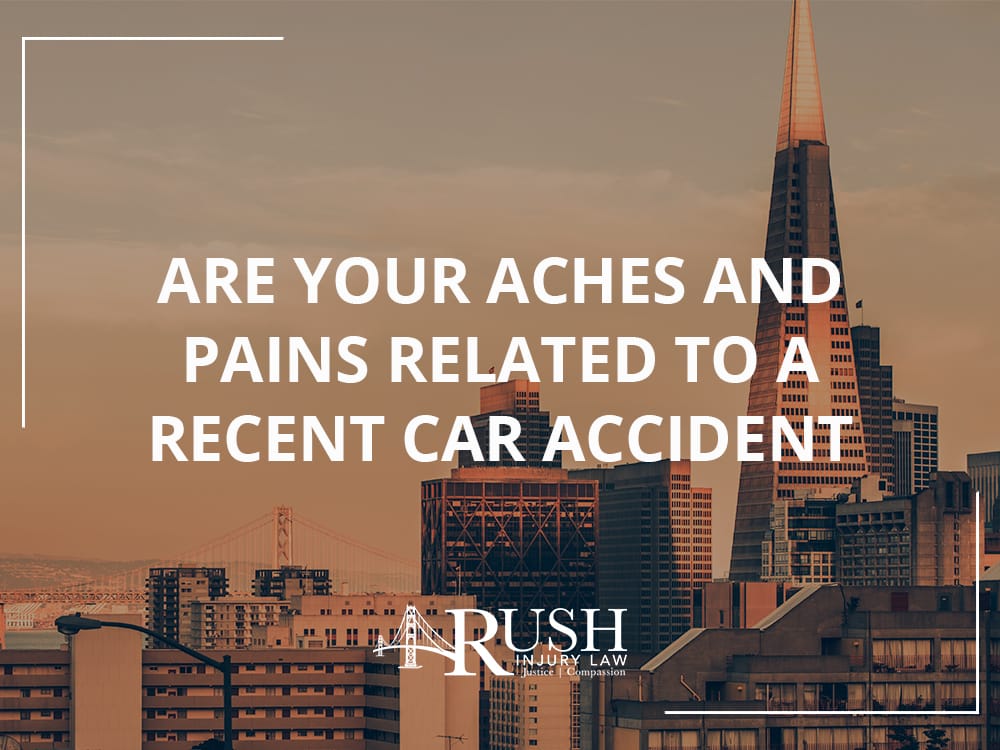 You may have been hurt more than you initially suspected.

Whether it’s a head-on collision or a mere fender bender, a car accident is an unexpected and traumatic event. Even in cases where you’re hit by someone traveling at a low rate of speed, you’re most definitely going to feel the impact, which may result in you sustaining injuries. If you are hurt in an accident, it’s best to get medical attention immediately. If your injuries seem minor-or if you don’t notice any symptoms-you need to be looked at by a medical professional anyways.

Below are a few things you can do to identify whether or not aches and pains you’re feeling are related to a recent car accident. If, after completing this article, you’re convinced that your ailments are the result of a crash, you should seek medical attention immediately.

Your Body May Not Realize It’s Injured Right Away

There are times in sports when athletes will sustain injuries, but they will play on unaffected by the pain-Curt Schilling’s bloody sock during Game 6 of the 2004 ALCS is a great example of this. In such heightened circumstances like these, the human body will generate adrenaline and endorphins, two chemicals that amp up the body, sometimes to the point where it can no longer feel pain.

Individuals involved in a car accident will most likely feel something similar to what was just described above. However, because there will likely be a bunch of other things on your mind in the event of a crash-whether or not the other driver is okay, whether or not your car is totaled, etc.-you may not even realize that your body is in such a heightened state. This may cause you to pay little or no attention to the injuries you may have sustained during the crash, which means you’re most likely going to notice them later on.

Look for Soft Tissue Damage After an Accident

In the event of a car accident-even a low-speed one-drivers and passengers will, in most cases, come to a sudden stop after the initial impact; if not, they will be thrown around in the passenger section; in very severe cases, they may be ejected from the vehicle. In any event, your joints and other vulnerable areas are going to be at risk of being damaged.

Get a Concussion Screening

If you bump or jerk your head at all during the accident (which is quite likely), you’re going to want to get yourself screened for a concussion. Concussions are very serious, and sometimes you won’t exhibit symptoms until later on. A medical professional will be able to tell whether or not you suffered a concussion because of an accident.